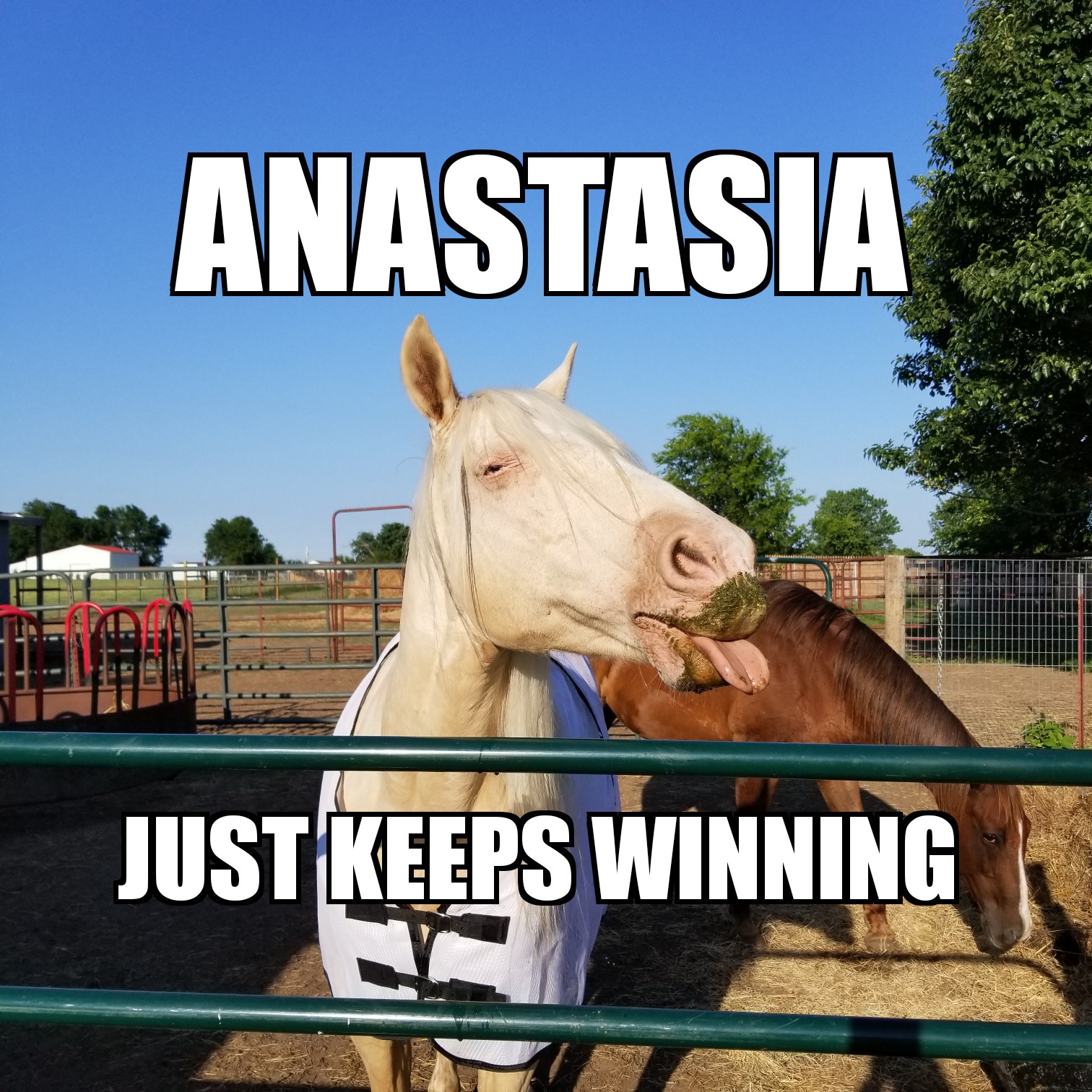 Screw you, Death! Anastasia keeps living up to her name

Home » Blog » Screw you, Death! Anastasia keeps living up to her name

Lame, dumped and forgotten on an Oklahoma kill lot with zero prospects for rescue and months of painful laminitis written all over her feet – Anastasia should’ve been dead, slaughtered and packed away in European and Asian freezers by now (or poisoning fine diners with her Bute-laden meat). But the stunning registered Missouri Fox Trotter has once again come back from certain death after two weeks of us believing this may be the day we have to humanely euthanize her.

It all started eight weeks ago with an aggressive trim to carve away a laminar wedge created by months of neglect. After 90 days of pain-free remission, Ani was seriously lame, barely able to use her front feet. According to the farrier (highly recommended by the vet), the rain, then heat, then rain, then heat, wreaked havoc on Ani’s previously healthy and thick soles, which expanded and contracted to the point where they were bearing most of her weight.

So began a terrifying avalanche.

Soon, the pain, heat and humidity were too much, and Ani developed anhidrosis – an inability of the body to cool off through sweat. Without human intervention, Ani would have died from heat stroke. Even fans and misters were not enough; so day after day, from mid morning to dusk, we stood out in the heat, hosing down Ani’s major vessels and vital organs – doing the work her own body was too wracked with pain to do.

On one of those many days where the horse heat index topped 170 degrees, Ani went down, head in a pile of manure, and wouldn’t get up.

We thought for sure she couldn’t recover, but we purchased every supplement, prescription, boot and device known to horsemankind in our all-out effort to save her. And we prayed. 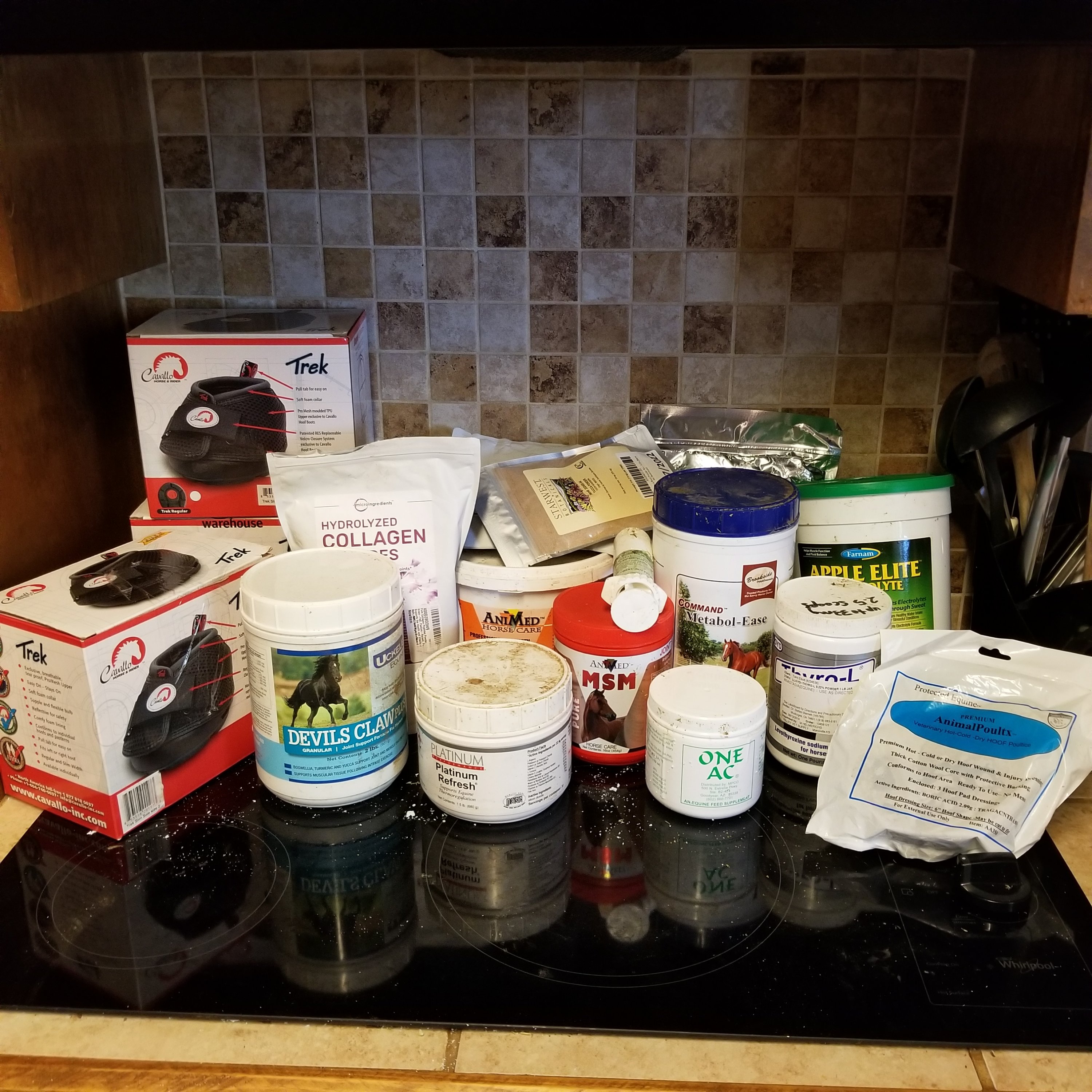 Within a day on Platinum Refresh, after several days of Guinness Stout and electrolytes, Ani was sweating on her own.

One hurdle down, the major hurdle of pain to go. 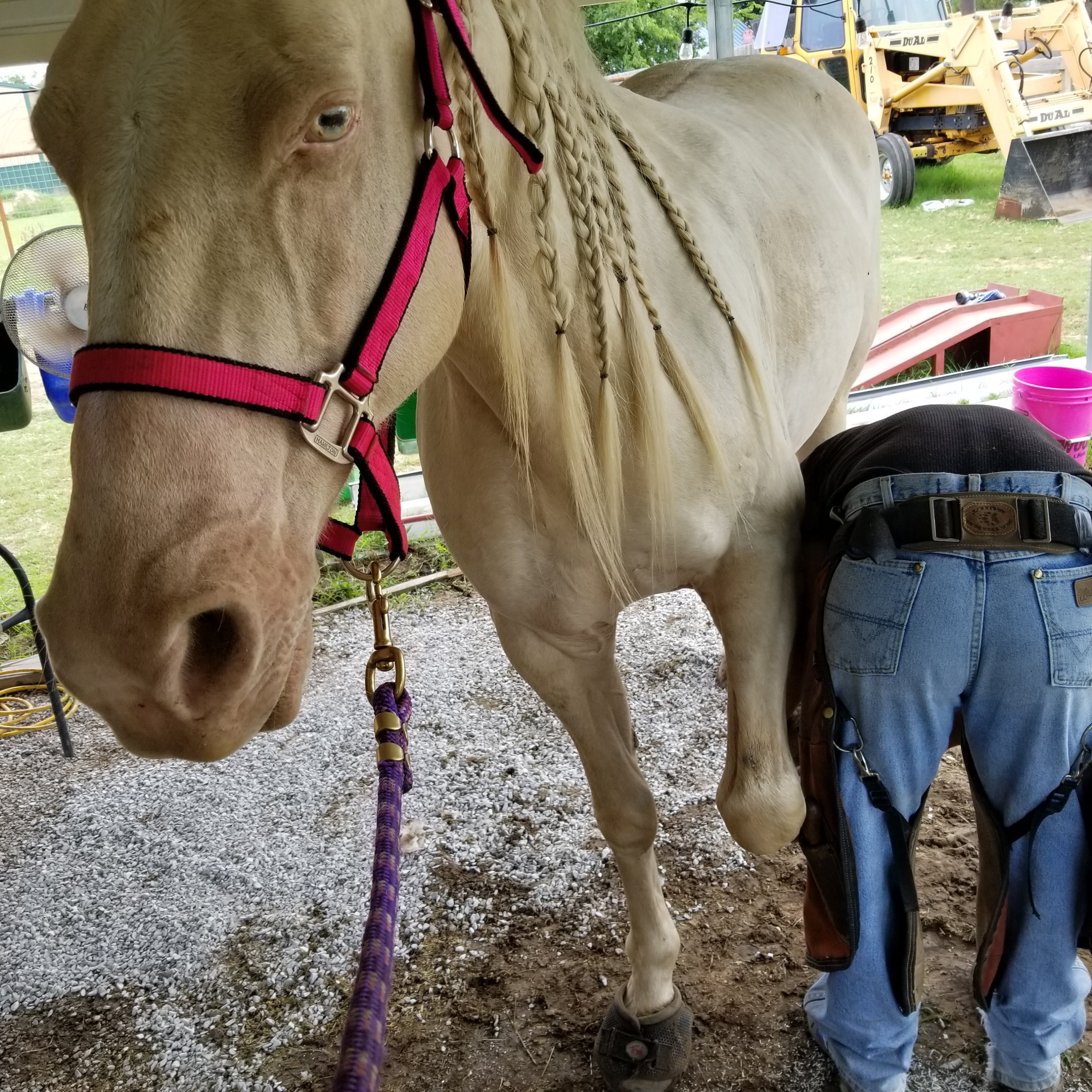 The farrier returned three times, trying everything in his bag of tricks to make Ani more comfortable. He and the vet said there’s been no further coffin bone rotation (with proper trimming, the rotation is improving), and Ani’s soles are improving. Finally, a combination of rocker shoes and soft sole boot inserts brought relief to the point where we could stop overloading her system with maximum doses of Bute.

Yesterday, we removed the boots. Today, Ani is walking on her own, without boots and on a minimal dose of Bute.

In addition to a prescription (Thyro-L) to kickstart Ani’s metabolism, we’ve added minerals and severely limited food for the hungriest little girl in the world. She’s eating only native hay and soaked, rinsed and drained hydration hay. No more of the delicious low-NSC Purina Senior grain she loves. Even low-NSC alfalfa cubes are off limits for now. Already, Ani’s cresty neck and marshmallow fat puffs are melting away, along with the obesity that triggers and exacerbates laminitis.

I hope anyone who was offended that we wouldn’t allow Anastasia to be adopted, now understands why. A horse rescue whose owners are willing to spend their own savings, supported by volunteers and donors, and whose veterinarian gives 501c3 discounts, is better equipped to provide 24/7 intensive care than a new adopter on her own. Swingin’ D was and is able to provide around-the-clock care and pay more than $5,000 to do whatever it takes to make Anastasia comfortable and eventually sound. The best intentions and biggest hearts in the world can’t make money, and we can’t take the chance that someone who truly loves and feels a connection to Ani (or any of our horses), also has the means to provide the care she needs and deserves.

We believe the best intentions and lack of wherewithal make kill buyers rich.

One day, I have faith Ani will be fit to ride and live a somewhat normal life. Are we finally on that path? We can only pray we are, but Anastasia has a home here until we’re 100 percent certain she’ll receive this level of care (or better) somewhere else.

Thanks to all of you who help us make miracles like Ani possible every day!